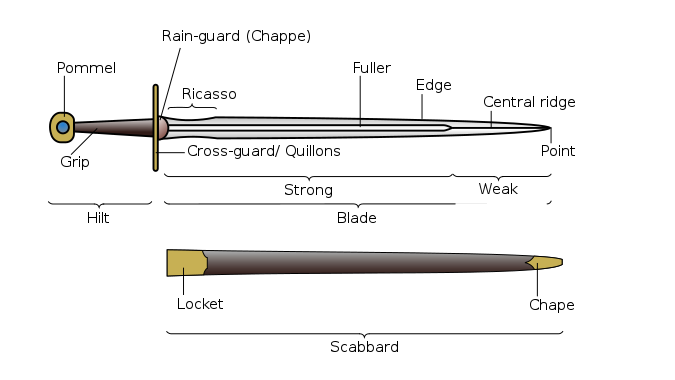 Note: While some of the modifications listed herein could be used on other weapons these rules apply only to Swords and Daggers.

Pommels: (The opposite of pointy end) While these are often used to as a place to put ornamentation and designs the Pommel can be used for a more effective purpose.

Bludgeoning attack: A pommel can be designed and reinforced to give the sword a bludgeoning strike. This strike causes damage two dice lower then the weapon in question IE a longsword does a d8 so a pommel strike from one would do a d4, a dagger with a pommel would do a d2 etc… This is considered a proficient attack and would have Strength bonus added to damage. (Note: A weapon that has Finesse uses dexterity instead of strength for damage and certain classes use other stats, which ever you use for the attack bonus of the weapon use it for the pommel strike.) A pommel strike can be used as an attack (IE apart of the attack action if you have the extra attack feature) instead of a blade attack OR can be a bonus action.

Holy Symbol: The pommel can be designed in the form of a holy symbol and would have the same uses in the hands of a Paladin or a Cleric.

Arcane Focus: As above for the holy symbol This use is as an Arcane focus.

Secret Compartment: The pommel is removable and a small secret compartment is in the hollow hilt.

Cross-guard: (The thing right above the handle but below the blade) Normally used to protect the welder’s hand, the Cross-guard can also be redesigned to provide aid in the disarming of an opponent’s weapon. There are two designs (The hooked guard and the V guard) that apply to this modification. Both designs impose disadvantage to saving throws to avoid being disarmed. The Hooked guard can also be used to deliver a bludgeoning like a pommel using the same rules.

Guarded Hilts: (The handle of the sword) hilt guards can be of many different designs, some are only ornamental but the ones here are functional, Basket hilts and D guards.

Full Basket Hilts: A full Basket hilt encompasses the hand with a metal cage with a padded cloth within. A full Basket hilt prevents any attempt at Disarming. A full Basket hilt also allows for a very effective bludgeoning strike which causes one damage die lower than the weapon. However to accommodate a weapon with a Versatile or Two-handed property the basket must be enlarged doubling the cost. Trying to do a basket punch is not possible to do with two hands.

Three-Quarter Basket: Covering only part of the hand, The Three-quarter basket provides the welder advantage on saves verses Disarming. A basket strike does the same as a pommel strike with this guard.

Half-Basket: covering far less of the hand the half-basket only grants the user a +1 to Disarm Saves and the basket strike only causes 1 point of bludgeoning damage plus strength bonus.

D Guard: The D guard is significant to mention as it is only provides the same +1 to Disarming Saves the solid metal of the D guard allows a guard strike equal to that of a pommel. These guards are most often seen on Daggers.

The Sinclair Hilt: Perhaps the most advanced of the hilt guards, the Sinclair hilt couples a full basket with a hooked Cross-guard. This allows the welder to impose Disadvantage on saves by an opponent to avoid being disarmed plus the basket strike uses the same dice as the blade of the weapon it’s on.

Guarded hilts can also have incorporated into them both holy symbols and Arcane focuses.

Spellguard basket: (Requires Attunement) While holding this sword drawn , you have advantage on Saving Throws against Spells and other magical Effects, and spell attacks have disadvantage against you

Adornment stones of power: Existing magic items like Luckstones and ioun stones can be fitted to the pommel or basket guard of a sword. Only a SINGLE stone can be so affixed. Aside from these there are other items that are exclusively used for this purpose.

Amethyst stone: When affixed it provides the welder the ability to use a hit dice to recover hit points as a bonus action 3 times per long rest. It can also be used once as a reaction to going into 0 hit points but it uses all remaining uses of the ability for a long rest. (There must be at least one use remaining to use this ability)

Sapphire stone: Allows the user to use the disengage action three times per long rest as a bonus action.

Amber stone: After this stone is attached to a sword, the weapon has a unique property: on any successful critical hit, the target is not damage but instead is temporarily covered in a translucent orange glasslike material. The target is paralyzed and has damage (any) resistance for the duration of the effect. Every round after the first allows the victim a Strength saving throw (DC 14) to break free. Three consecutive failed saves results in permanent encasement in amber (the character is effectively dead, but preserved). After the power is used the stone goes dormant for one week.

Bloodstone: This red stone is polished to a sheen. Once it is attached to a sword, it absorbs the life’s blood of enemies killed by the sword. Each enemy killed by the sword adds 1 “blood point” to a pool accessible by the sword’s wielder. Each such point may be spent to add either +2 to hit or +2 to damage. More than one blood point may be spent on a single attack. The bloodstone holds a maximum of 4 blood points. The wielder must choose to spend one or more blood points at the time of making an attack, prior to the rolling of the dice.

Fire Opal: This orange, red and white stone seems to glimmer with an internal flame. When attached to a sword, it confers upon the wielder resistance to fire. In addition, the damage caused by the sword is considered fire damage.

Psionic Crystal: This small translucent stone has 8 charges which recover 1d4 after a long rest. The stone can do the following Amplify (4 charges) (Upon an Action you can sheathe the blade in psychic energy and has the weapon cause an extra 3d8 points of psychie damage for one minute, Flay (2 charges per d6) as a bonus action the sword can fire a wave of psychic energy that effects all enemies in a range of 60’ (Intelligence Save DC: 12). Distance (1 charge per target) as an action, choose any number of targets in 30’ they must make an intelligence save (DC 12) or be pushed back 30’

Ascendant campaigns can view previous versions of their pages, see what has changed (and who did it), and even restore old versions. It's like having a rewind button for your campaign.

We've already been saving your edits, so if you upgrade now you will have instant access to your previous versions. Plus, you get a 15-day free trial, so there's nothing to lose.

I'm sorry, but we no longer support this web browser. Please upgrade your browser or install Chrome or Firefox to enjoy the full functionality of this site.